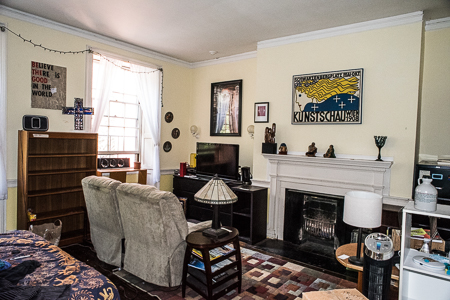 And we hope you’ll join us there in our new adventure, living across the hall from Kate & Marton and Leila & Mateo. You can sign up for email alerts to new posts on the new blog simply by clicking Follow Across the Hall in the right rail of the new site. Read more about what we’re up to here.

For the first time in a couple of years, I climbed the steps to the Friends House not as a resident but as a guy with no way in.

I had to remind myself not to use the special doorbell code for housies who’ve forgotten their key. Instead, I pressed the bell once and waited, much as any passerby might.

The greeting I got from Ben was a boisterous reminder that, at least among my former housemates, I’m no stranger. 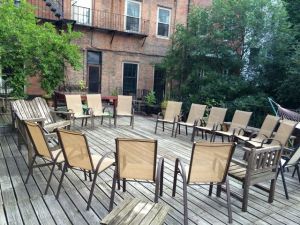 The visit got me thinking about what I share with the 32 people previously known as strangers with whom I did dish crew, shoveled snow, painted a bathroom, installed a lightswitch, scrubbed toilets, washed windows, sat in silence and passed the talking rock between June 2013 and August 2015.

Stepping into the office, Ben pointed me to a bin of mail the Post Office had failed to forward. I glanced at the mailboxes of the 21 current residents and noticed a couple of new names above our old slots

Heading downstairs to the kitchen, I ran into Billy, who’d made such an impression on Leila, our two-and-a-half-year-old granddaughter, that she was convinced he’d be joining us in our new apartment in Brookline. Encountering a friendly face I didn’t recognize, I figured it must be John, who moved in by virtue of us moving out. He lives now in our old room on the third floor.   END_OF_DOCUMENT_TOKEN_TO_BE_REPLACED 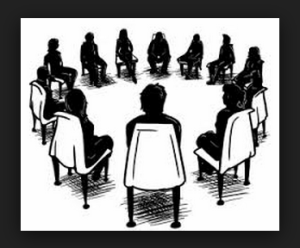 Shortly after getting off the plane in San Francisco last week, I went to my first AA meeting. A friend invited me to tag along to the gathering where she’s been a regular for years. It was an open meeting — meaning visitors were welcome — and my friend had been asked to tell her story as the evening’s guest speaker.

In many ways, the ragtag assembly of a few dozen folks in a nondescript storefront reminded me of our twice-monthly house meetings at BHFH. Both begin with a moment of silence. Both follow clearly prescribed (and time-limited) procedures for sharing personal stories and conducting business. Both are closely aligned to the values of their sponsoring organizations — Alcoholics Anonymous and the Religious Society of Friends (Quakers). Both organizations refer to their Meetings in ways that suggest an upper case M.

I expected to learn some new things about my friend at the AA meeting, and I did. What surprised me was learning something about the topic that occasioned our trip to the west coast in the first place.

END_OF_DOCUMENT_TOKEN_TO_BE_REPLACED 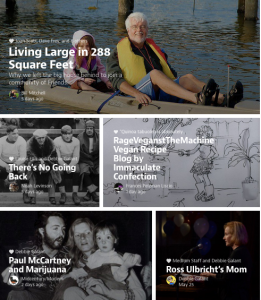 Debbie Galant, editor of an intriguing new online magazine focused on “following Boomers into their third act,” invited us to introduce readers of Midcenutry/Modern to A Year in a Room.

Since her good edits included questions I’m not sure we’ve answered on ayearinaroom.com, I’ve included a link to the story here.  That photo of granddaughter Lanie, now 14, is a bit dated, but we sure did enjoy those pedal kayaks in St. Pete.

While you’re visiting Midcentury/Modern, I hope you’ll take time to read a couple of stories I’ve recommended there:

You can read more about Midcentury/Modern in this announcement of its selection as one of four winners of “Geezer Grants” for media startups created by people 50-plus. I’m aware of various journalism awards programs and conferences for other demographics — including young journalists and women entrepreneurs — but this is the first I’ve seen for the demographic I now call home. Just the sort of thing that someone enrolled in a gap year for geezers might want to pursue. 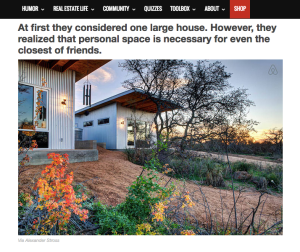 A group of friends clustered tiny houses together in Texas. (screengrab: lightersideofrealestate.com)

Coming up on two years at BHFH (it turned out that ayearinaroom wasn’t enough), we’ve applied for what’s known as “third year residency.”

The house puts a limit on how long residents can live here. At the outset, you’re admitted for two years. Staying longer requires an application making the case that you’ve been a reasonably reliable contributor to house life and that you’ll continue in that vein in the year ahead. A similar process is available for a fourth year, but that’s the limit.

In the two years we’ve been here, the house has welcomed 16 new residents. Four of them have left for one reason or another. Of our 19 current housemates, we’ve been here longer than 12.

As much as we’ve occasionally wished for a longer tenure, I think the residency limits make sense. Living in this sort of community can be a transformative experience, especially if it’s carried forward into something new. And there’s something about getting to know a new resident every six or seven weeks that makes life at BHFH even more interesting.

We’ve considered a number of options for life after BHFH. END_OF_DOCUMENT_TOKEN_TO_BE_REPLACED

At a recent house meeting (we hold them twice a month at BHFH), everyone was invited to write a couple of pet peeves about living in the house and place them in a basket.

Some of the beefs that made their way into the discussion:

Sound like any household you may have been part of at some point? 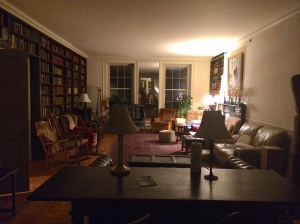 One of mine : “More a puzzle than a peeve — how to raise questions or issues with staff without feeling like walking on egg shells.”

One of Carol’s: “When people bring a lot of negativity or irritability into public spaces.”

In some ways, it’s strange that I’d be annoyed by the staff issue. I’ve felt from the start of our time here that one of the best things about BHFH — differentiating it from most coop living situations — is the work of staff who are paid to serve and lead a community they’re also part of. END_OF_DOCUMENT_TOKEN_TO_BE_REPLACED

I’ve been watching, via his Facebook page, the transition of friend and colleague Mario Garcia from his 5,400 square-foot home in Tampa Bay to 800 square feet of co-op living in Manhattan.

His Facebook posts revealed the nuts and bolts of the move as it unfolded. But he’s just posted an essay on the downsizing that reflects the same panache and insight that’s made him one of the world’s leading designers of publications and digital apps.

Everyday is special after you edit your life and live with the abridged version of yourself.

This is a story just about that, and how I learned that you don’t have to wait until the third act of your life for editing your life. There is renewal, practicality and emancipation.

As a visual journalist/designer, I have spent my career editing pages for publication, and more recently for websites, phone and tablet apps.

Nothing, however, prepared me for what I call the editing of my life. Editing the work of others can’t compare to the exercise of dealing with the roles of space, economy and redundancy in your own life.

In some respects, our move from Tampa Bay to Boston was more modest than Mario’s. We left a house in St. Pete that was less than half the size of Mario’s across the Bay in Tampa, and we’d lived there for only a decade vs. the 30 years Mario and family spent in theirs. We both relocated to pretty posh parts of pretty great cities — Mario to the Upper East Side of Manhattan; Carol and I to Beacon Hill just a block from Boston Common. END_OF_DOCUMENT_TOKEN_TO_BE_REPLACED

I have no idea what I was thinking when I decided to update our eight year-old iMac to the Yosemite operating system. Midway through the install, the screen went blank and there appeared to be nobody at all home — and no apparent way to ring the door bell. 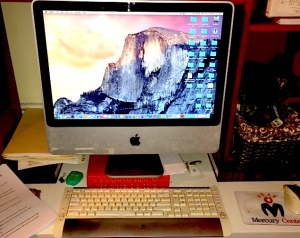 Googling the problem showed many others had suffered the same fate, without any clear path to recovery. I really needed that machine in prepping for the teaching I’m doing this week in Vienna, but didn’t have the time to haul it down Boylston to the Apple store.

And then I spotted Sumner, a former housie, sitting in the kitchen. Sumner is a programmer who continues helping his former housemates in all sorts of ways — honchoing our workdays, tweaking our new high speed wireless and more. So much so that I was reluctant to impose on him for volunteer tech support on a Saturday morning.

“No problem,” he said when I went ahead and asked anyway. With his phone he discovered a possible solution that had eluded me. “But hold down your hopes,” he cautioned as I headed upstairs muttering Hail Marys and hoping, despite his cautions, that the old beast might somehow come back from the dead.  END_OF_DOCUMENT_TOKEN_TO_BE_REPLACED

Shortly after I posted a note last week about the death of college roommate David DeCoursey, a high school classmate, Francine Gouvin Bernard, posted a comment: “Sorry for your loss, Mitch. It’s starting…”

Actually, Dave’s was the last of four funerals I attended in 2014, but Francine was right about something starting: Just as many of our younger housemates at BHFH find themselves heading out to weddings, Carol and I are showing up at more and more funerals. 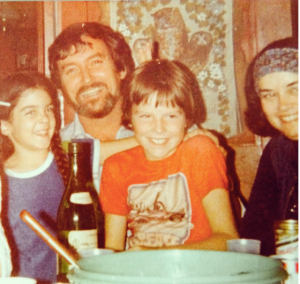 The first was for my cousin, Brian Mitchell, who died July 3 at his home on Cape Cod. At lunch after the service, Brian’s widow, Judy, told us that he went out in a way that, had he been given a choice, he might have chosen: Sitting on the porch with his wife of 53 years, drinking a beer.

Brian was ten years older than me, and I wish I’d made a point of telling him what a life model he’d become for me in two important respects: Charting a path that fits, and having fun along the way. END_OF_DOCUMENT_TOKEN_TO_BE_REPLACED 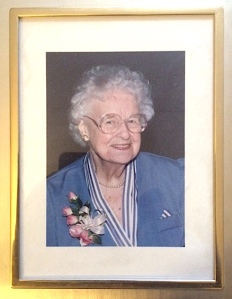 I’ve written previously about Talking Rock, the device we use at house meetings to share what’s going on in our lives. Whoever happens to be sitting closest to the rock (it lives on the fireplace mantel in the library) grabs it and spends a couple of minutes updating the 20 other housemates.

The revelations range from matter of fact to life and death. As much as I’m getting more comfortable with the exercise, I still struggle to get beyond the nuts and bolts of daily life and share at the level of my braver housemates.

A show and tell/talent show at a recent house retreat seemed like a good opportunity to go deeper, especially since lack of musical or related talent had me leaning toward the show and tell option for the session.

So a few minutes before the group gathered in the parlor, I grabbed the photograph of my Mom, Evelyn, from our room. I began framing the story I wanted to tell about this eldest daughter who gave birth to me just a few miles from where we live now on Beacon Hill. END_OF_DOCUMENT_TOKEN_TO_BE_REPLACED 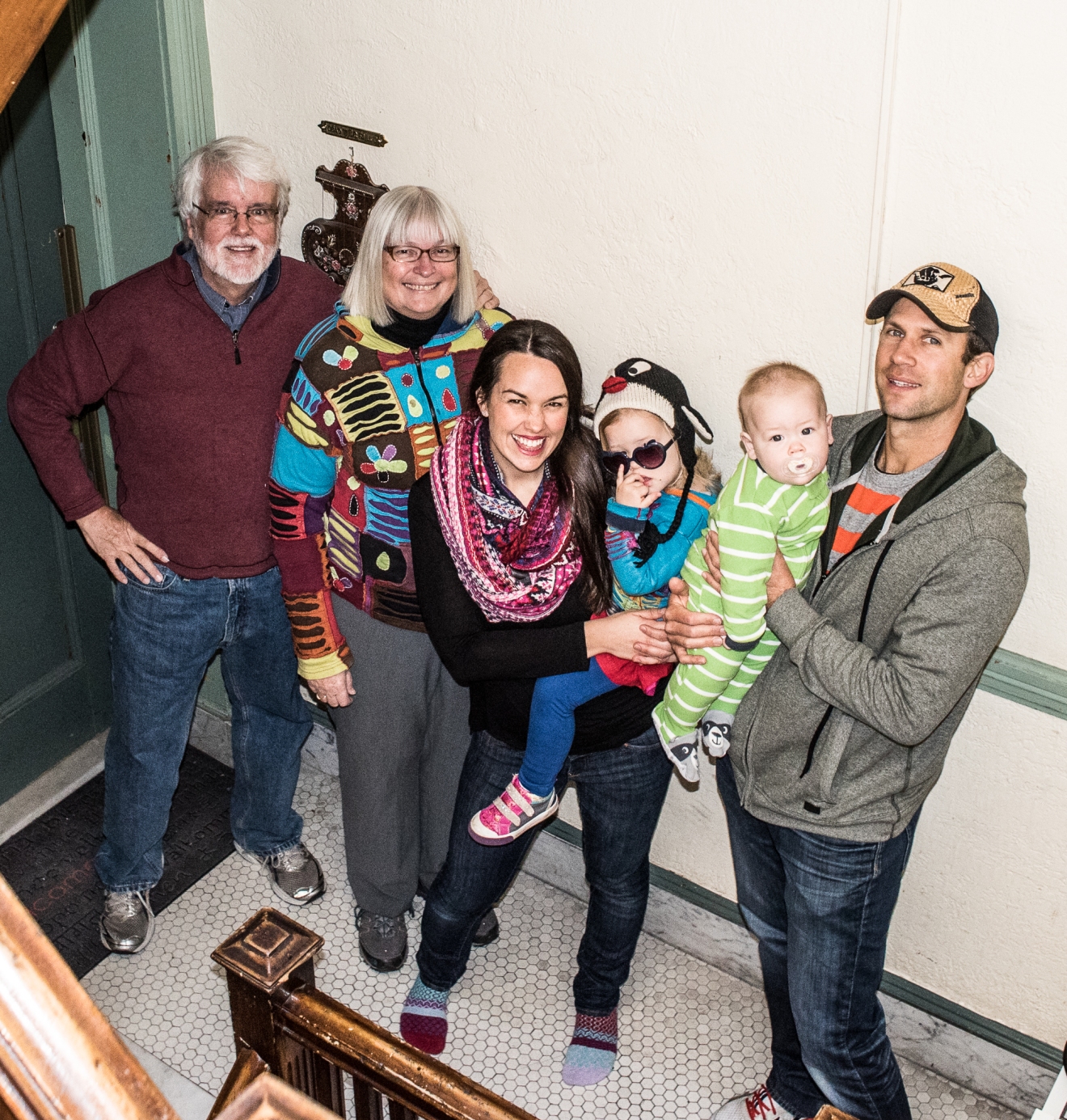 A Year in a Room
Blog at WordPress.com.
Loading Comments...