If you’re anything like me, there’s one place you want to be when you’re sick. And that’s home, which is also the place I want to be for the holidays.

Carol and I experienced both during last week’s combined holidays of Hanukkah and Thanksgiving. We’ll spare you the details, but let’s just say we gained a new understanding of the shared-bathroom-down-the-hall (SBDTH) part of our lives at Beacon Hill Friends House. We recognize our fortune at dealing with minor illness that came and went in a matter of days. As brief and non-threatening as it was, it showed us some things. 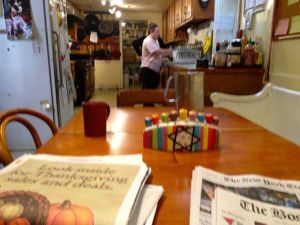 Thanksgiving morning in the BHFH kitchen

The bug hit Carol about 24 hours before it snagged me, a staggered staging that rendered our circumstances more workable than they might have been. By the time things subsided over the weekend, I was covering the dozen steps from bedside to SBDTH in seven seconds flat — an urgent journey that would not have accommodated dual racers in the hall.

Apart from the challenging logistics, I’d wondered what it might be like to be ill in the house. I’ve always hated getting sick on the road, away from the familiar accoutrements that can help ease the disruption, if not the discomfort, of digestive revolution.

As the bug took hold Thanksgiving evening, I was worried about some pretty dramatic sound effects. Some of our third-floor neighbors were away for the holidays, but those on hand reported sleeping through whatever was going on next door. Our larger concern was passing on the virus to others — a fear that at least one of our neighbors has unfortunately realized.

Another concern was eased by three housemates who covered our most pressing house chore responsibilities — hauling an especially heavy load of trash, recycling and leaves to the curb for early Friday pick-up.

These sorts of things happen all the time in families, of course, and that ended up being key. I’ve always resisted feel-good efforts by employers to describe work colleagues as “a family,” but I feel no reluctance at using the F word to describe the BHFH community.  I wished — prayed, even! — for many things over the course of those nasty 36 hours. But never once did I wish to be sick anywhere else.  To the extent I could feel comfortable anywhere with my body behaving badly, I felt at home here.

It was Thanksgiving morning — before I got sick — that I really appreciated living in the house at holiday time. Many housies had headed out of town for the long weekend, but the kitchen was unusually busy. A menorah presided over the kitchen table and, at the other end of the room, several housies were busy with dinner preparations.  That night at dinner, we had more guests than housies — an experience of hospitality that made me feel especially happy to be home for the holidays. Even if, before the night was over, I’d end up sick for the holidays, too.

Your stories of being home (and/or sick) for the holidays?

6 thoughts on “Sick (but home) for the holidays”